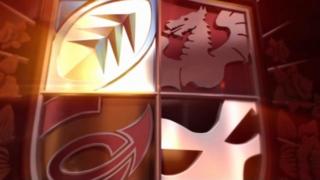 Countdown to the Pro12 season

Scrum V presenter Ross Harries meets the head coaches from the four Welsh regions as they prepare for the start of the new Pro12 season without their international stars.

It will be all change at Cardiff Blues following the arrival of Danny Wilson as head coach, while director of rugby Lyn Jones believes his Dragons team are on the right track to build on last season's improvement.

Stephen Jones has returned to the Scarlets as assistant to head coach Wayne Pivac, but can anyone challenge Steve Tandy's Ospreys to be Wales' leading region?

Scrum V Live returns on Friday with live coverage of the opening game of the season as Ospreys visit Ulster (BBC Two Wales, 19:30 BST; also online and via iPlayer).