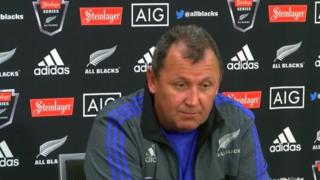 All Blacks wary of rustiness - Foster

New Zealand assistant coach Ian Forster says Wales' poor display against England is viewed as a warning by the Kiwis for Saturday's first Test in Auckland.

Wales were outscored five tries to one in a 27-13 defeat by England at Twickenham on 29 May.

Wales have not beaten the All Blacks for nearly 63 years.