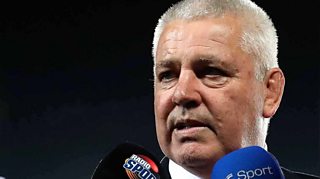 Lions must 'tighten up' discipline - Gatland

Lions coach Warren Gatland wants his side to improve their discipline following their loss to the Blues in Auckland.

The Lions conceded 13 penalties and two free kicks at Eden Park as they suffered the first defeat of their tour of New Zealand.

Irish international Jared Payne limped-off during the second-half but Gatland said the centre's calf injury does not appear to be serious.