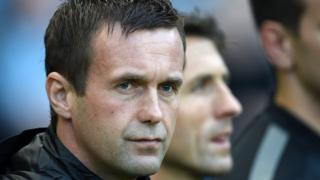 Celtic manager Ronny Deila says his side's performance at Murrayfield was "not good enough" was they lost 2-0, resulting in a 6-1 aggregate defeat by Legia Warsaw in the Champions League qualifier.

The Scottish champions are now out of the running for a third consecutive Champions League group stage spot, but enter into a play-off for the Europa League, with the draw on Friday.