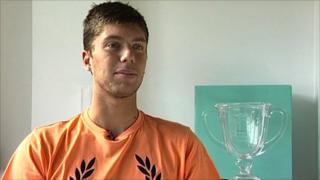 Golding stepping up to seniors

Oliver Golding reveals he plans to step up to the senior tour following his victory in the US Open boys' event.

Golding says the 5-7 6-3 6-4 victory over his doubles partner Jiri Vesely in New York brings him "a lot of confidence" and that the trophy will take the "number one" position on his mantlepiece.

The 17-year old Londoner also reveals plans to join up with the GB Davis Cup squad before their match against Hungary in Glasgow this weekend.