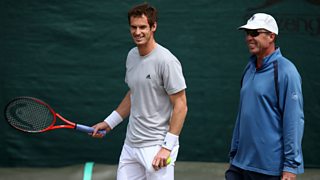 Andy Murray says former coach Ivan Lendl has rejoined his team for the start of the Aegon Championships at Queen's Club.

Murray has been without a coach since splitting with Amelie Mauresmo shortly before the French Open last month.

The Scot said: "We had a chat, he messaged me yesterday and said let's do it."

Murray won Wimbledon, the US Open and Olympic gold during the two years he spent with Lendl.