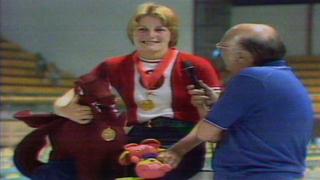 BBC Sport looks back to when Patricia Beavan of Wales upset the odds with a brilliant swim to take gold in the women's 200m breaststroke in Christchurch, New Zealand.

It took 32 years for Wales to claim their next Commonwealth Games gold in the pool, when David Davies won the 1500m freestyle at Melbourne 2006.

But there was a wait of another eight years before a Welsh woman would emulate Beavan, when Jazz Carlin set a new Games record of eight minutes 18.11 seconds as she took the 800m freestyle title at Glasgow 2014.