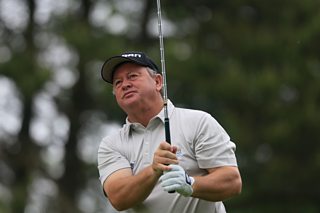 Chris Williams carded a two under par 68 to maintain his two shot lead going into the final round of the Wales Senior Open.

An early bogey on the fourth hole of The Celtic Manor Resort's Roman Road course saw Williams fall back into a share of the lead, but a brilliant eagle two at the par four 12th helped the South African charge back to the top of the leaderboard.

Williams finished the day on seven under, two shots ahead of former Ryder Cup player Paul Broadhurst, who produced the performance of the day with his five under 65.

Broadhurst moved ahead of Lianwei Zhang, who remains in contention after shooting a second round 69. The 51 year old is in third place on four under par.

After holding the overnight lead, Williams was pleased to have started the day in comfortable fashion as he goes for his second European Senior Tour win, having won the 2011 Brunei Senior Masters

He said: "The opening hole is a tough one. Fortunately, I was a little down-wind, I went into the bunker but hit a good up and down. I then got up and down on the second hole which settled me down a bit for the round.

"The eagle was the only real incident out there today. I'd been two-putting every green. On the 12th, everything feeds into the pin. My idea was to hit the front right to feed into the bank and use my draw help that - and that turned out alright!

"It was about taking one shot at a time and making sure I didn't get ahead of myself. The greens were challenging and it was sometimes difficult to get the pace right.

"It's a case of hitting as many greens as you can round here. I've got Paul Broadhurst chasing the lead and he's a really accomplished player.

"There are a lot of good players behind me, but I have to concentrate on my own game and whatever happens, happens."