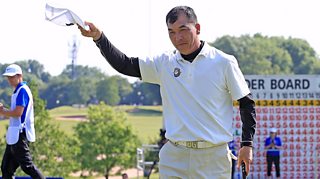 China's Lianwei Zhang shot an incredible eight under par 62 in the final round of the Wales Senior Open to secure his nation's first title on the European Senior Tour.

Thirteen years after becoming the first Chinese winner on the European Tour, Zhang matched that achievement on the Senior Tour, holding off the challenge of former Ryder Cup pair Paul Broadhurst and David Gilford at The Celtic Manor Resort.

Zhang, who trailed overnight leader Chris Williams by three shots, ran riot on the front nine as he recorded four consecutive birdies and an eagle on the opening five holes - he then added another two birdies to reach the turn in just 29 shots.

He then posted six pars in a row on the back nine before birdieing the 16th, and despite his only bogey of the day on the final hole, his 12 under par total for the tournament gave him a three shot victory over Broadhurst, who carded a closing round of 66 to finish runner up, with Gilford, a further shot back in third place.

"I was pleased to be in the final group and then I had a very good start," said Zhang. "I had four birdies then an eagle, and then birdies on eight and nine.

"I made a mistake on 10, I missed a three foot putt for birdie, but I kept going. When I made another birdie I led by three shots. I missed par on the last hole, but it's okay. I'm very happy."

Zhang's only European Tour win came in the Caltex Masters in in Singapore in 2003 when he held off the challenge of major Champion Ernie Els, and the 51-year-old admitted: "I'm so happy and proud to become the first Chinese winner on the Senior Tour."

Broadhurst backed up Saturday's second round score of 65, signing for a final round of 66. The Englishman secured his fourth top ten finish in just six events on the Senior Tour.

The 2015 Senior Tour Rookie of the Year posted five birdies on the front nine and kept the pressure on Zhang down the stretch with two additional birdies on the 11th and 15th holes, before also dropping a shot on the last.

"There wasn't a lot I could do out there," said Broadhurst. "He didn't give me much of a chance. His front nine was probably the best I've ever seen.

"I now know how Colin Montgomerie must have felt last week at the US Senior PGA. You just have to take your hat off and applaud what Zhang did out there."

Gilford, a six time European Tour winner, carded a sublime 64, which included an eagle and eight birdies, to finish third on eight under par in just his second Senior Tour appearance, having made his debut in last year's French Riviera Masters, where he finished tied 26th.