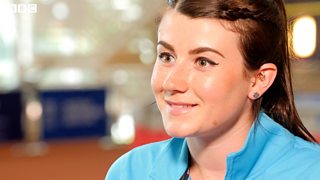 The 22-year-old, who was born without her right forearm, has been to three Paralympic Games, holds the world record and has won the last two world titles.

She told BBC Wales Sport that she wants to gain more respect by challenging able-bodied athletes and that it will be a difficult decision to choose between Wales and England at next year's Commonwealth Games.