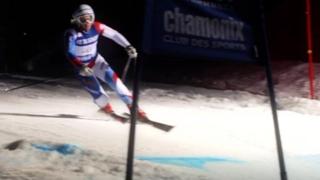 The art of Telemark skiing

Telemark skiing is a style where the heel is lifted from the ski to create turns. Named after a region of Norway, Telemark declined in popularity in the 1940s, but enjoyed a resurgence in the 1970s.

Telemark competitions consist of a giant slalom, a jump, a 360-degree turn and a slightly uphill cross-country skiing section.

There are three disciplines, one including a dual downhill sprint, where two athletes race alongside each other.

British competitors are campaigning for it to become an Olympic sport. (Video courtesy of Kaptura)