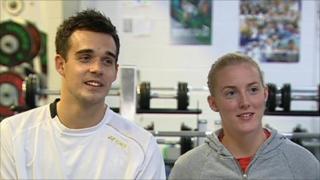 Prior to Chris Adcock and Imogen Bankier's World Championship silver medal, badminton in the UK had endured difficult times.

It had been five years since a major international success, whilst in-fighting and a lack of leadership had seen the sport plummet to a level where, at the end of 2010, UK Sport decided to reduce their funding.

BBC Sport's Nick Hope caught up with the pair during their first day back in training, following their World Championship exertions.