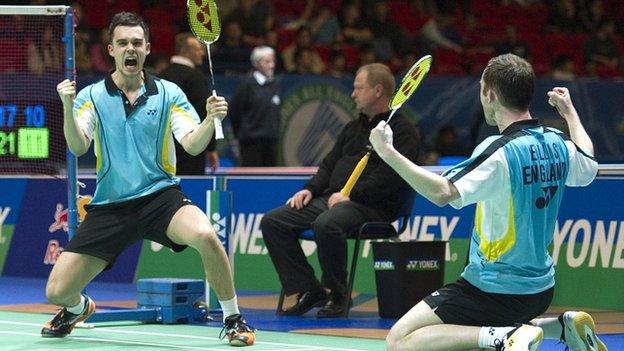 Chris Adcock and Imogen Bankier fought back to beat the world number ones at the All England Open Championships.

It was the duo's second win over the Chinese pair this year.

The duo, who have fallen behind Adcock and Bankier in the world rankings, need a good tournament to boost their hopes of securing the expected single place on offer for London 2012.

Robertson said: "I was very happy with the win. I think we turned the corner at Christmas time, we had a good training patch in December.

"This is a result of playing a little bit better. We were confident we were going to win, especially in the arena with this crowd."

Adcock's win in the mixed doubles was his second impressive victory of the day after he and he Andy Ellis produced a storming comeback in the men's doubles to beat Indonesia's world number 10s Alvent Yulianto Chandra and Hendra Aprida Gunawan 13-21 21-17 21-13 in an epic encounter.

Ellis said: "I think that's some of the best badminton we have played. I think losing the first game spurred us on."

Wallwork was back on court as midnight approached and she and Gabby White, who had battled through the qualifying rounds, went down 21-16 21-10 against top seeds and women's doubles defending champions Wang Xiaoli and Yu Yang.

Exactly 70 minutes later Ouseph had not only taken a game off Gade for the first time in eight meetings in ranking tournaments, he had also snatched his first victory against the 35-year-old in his last All England.

Scotland's Robert Blair and Jillie Cooper also saw their first competition together come to an end in the mixed doubles. They lost 21-15 21-17 to Indonesia's Muhammad Rijal and Debby Susanto.