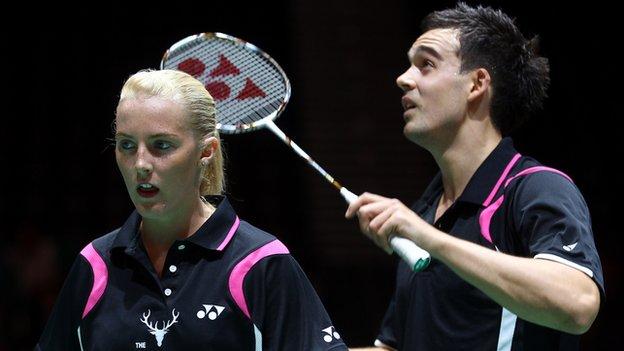 England's Chris Adcock and Scotland's Imogen Bankier fought back to reach the mixed doubles quarter-finals at the All England Badminton Championships.

But Adcock and Andrew Ellis went out of the men's doubles and Rajiv Ouseph lost to Malaysian Daren Liew in the singles.

Chris Adcock and Imogen Bankier lost their only previous meeting with Chang Peng Soon and Goh Liu Ying, which was in the 2011 China Masters

Adcock felt he and Bankier had fallen below the standards set in their stunning first-round triumph.

The 22-year-old said: "I would give us two out of 10 for the performance. We did not reach the heights as we did against the number one seeds.

"We were lacking in all departments in the first game but the crowd lifted us to see us through this difficult match."

Commonwealth silver medallists Robertson and Wallwork, who are competing against Adcock and Bankier for a place at the Olympics, were even more impressive in the way they disposed of Taiwan fifth seeds Chen Hung Ling and Cheng Wen Hsing.

They pulled away from 4-4 in the opening game and from 3-3 in the second to clinch victory.

The battle for the mixed doubles place at London 2012 remains tight with Adcock and Bankier 17th in the latest rankings, published on Thursday, and 2004 Athens silver medallist Robertson and Wallwork 19th.

Britain looks likely to have one team at the Games, with the world rankings on 3 May being used to decide who makes it to London., and the rivals could meet in the semi-finals if they both win their next matches.

Earlier Adcock and Ellis' hopes of building on a brilliant first-round win, over Indonesia's Alvent Yualianto Chandra and Hendra Aprida Gunawan, were dashed as they lost 21-13 21-15 against Korea's Jung Jae Sung and Lee Yong Dae.

Ouseph, who beat fourth seed and former champion Peter Gade for the first time in a late finish on Wednesday, suffered a frustrating 21-15 21-10 defeat against Malaysian qualifier Liew.

He said: "I'm very disappointed with my performance. I wanted to build on my performance against Peter but I felt lethargic. I had no speed in my legs and I made a lot of unforced errors."