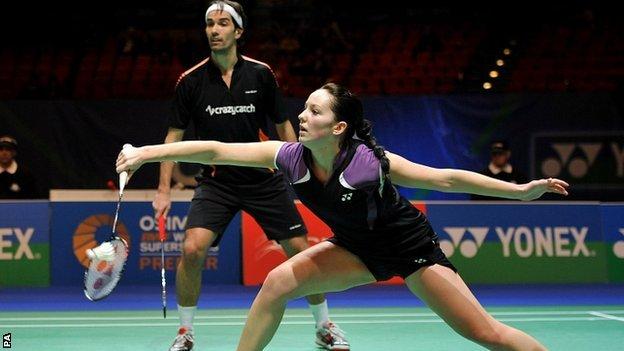 Britain's mixed doubles pairs were both beaten in the quarter-finals at the All England Championships in Birmingham.

Nathan Robertson and Jenny Wallwork were unable to take advantage of their Olympic rivals' elimination.

They were overwhelmed in the deciding game by Indonesia's fourth seeds Tontowi Ahmad and Liliyana Natsir in a 21-19 14-21 21-6 defeat.

The results leave the two British pairs, who would have met in the last four had they progressed, locked in a tight battle for the expected single place at London 2012.

The pair placed the highest in the world rankings published on 3 May is likely to be selected at the other's expense.

British duo Chris Adcock and Imogen Bankier's impressive run was a time-consuming affair. Their opening win took 66 minutes, the second round lasted 59 minutes for them and their quarter-final defeat went on for 55 minutes.

The Anglo-Scottish pairing of Adcock and Bankier, the world championship runners-up, still retain the edge at 17th with veteran Robertson, a 2004 Olympic silver medalist, and Wallwork 19th.

After beating the top seeds earlier in the tournament, Adcock and Bankier began the day with high hopes but trailed throughout the decisive third game against their Malaysian opponents.

Adcock said: "I'm very disappointed. We can take some positives - we beat the top seeds and a very good Korean pair yesterday.

"We're both looking towards the Olympics, although there are some tournaments still to play before we know for sure."

Bankier said: "It was a game we could have won but they were returning well and, although we were serving tight, they were difficult to get past."

With big points available in the final Super Series premier event of the qualifying period, Robertson and Wallwork could have made inroads into their rivals' lead by progressing further.

Yet after fighting back to level the match after letting the first game slip, Ahmad and Natsir upped their level in the third to clinch victory in 59 minutes.

Robertson, 34, took positives from their performances over the week and pledged not to give up the Olympic fight, although he conceded time was now running out.

He said: "This has been our best performance for over a year and it's good to play well at the All England.

"But the Indonesians proved why they are fourth in the world. We were well in the game until the third set.

"We go straight to the Swiss Open next week. There are two British pairs in the running for Olympic qualification and we're still chasing. We need to maintain this level.

"It's up to the others really, it's close and we're running out of tournaments. If they get the results they'll get there."

Wallwork said: "We couldn't maintain our level in the third set. They served very well and we couldn't return so we were always on the defence."