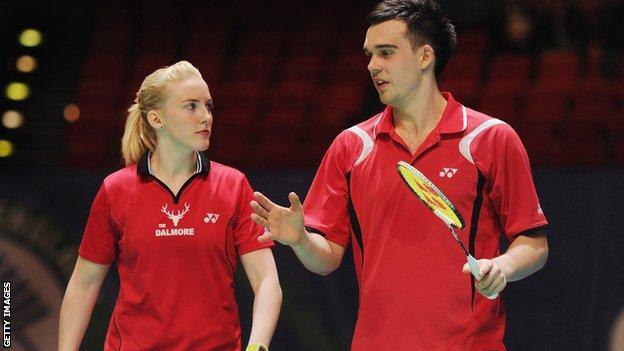 The pair ranked highest in the world on 3 May are most likely to be selected for Great Britain at London 2012.

Adcock and Bankier moved up three places back to number 14 in Thursday's latest ranking list, while Wallwork and Robertson went up two places to 17.

Scottish star Bankier said: "It was really nerve-racking and so tight it could have gone either way, but when we were match point down we played really well and saved all three.

"It was one of the hardest matches we have played and was really quite stressful. It was very tense on court and I think we were all quite nervy at the end."

Adcock added: "We were very nervous all day. There were a lot of emotions flying around. But I think we've made a pretty big statement with this win."

The pair will now face either the sixth seeds Songphon Anugritayawon and Kunchala Voravichitchaikul of Thailand or Japan's Kenichi Hayakawa and Misaki Matsutomo in the quarter-finals.