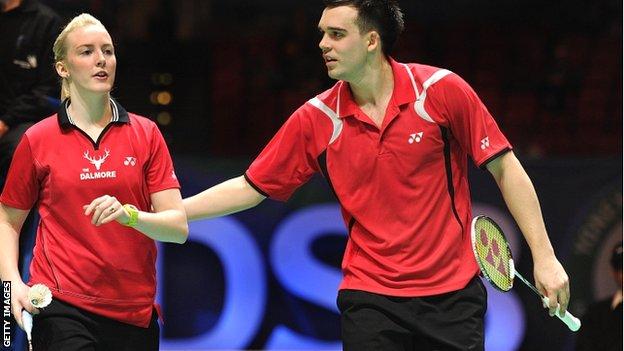 Britain's Chris Adcock and Imogen Bankier reached the semi-finals of the Swiss Open with a 21-9 21-19 win over Kenichi Hayakawa and Misaki Matsutomo.

The pair beat their rivals for an Olympic place, Nathan Robertson and Jenny Wallwork, who are ranked 17th in the world, in round two on Thursday.

And reaching the semi-finals assures them of a rise up the rankings from their present position of 14th.

The highest-ranked pair on 3 May are most likely to gain Olympic selection.

Adcock, an Englishman, and Bankier, from Scotland, were always in control in the first game against the Japanese pair, taking it in just 10 minutes.

The second game was tighter, with the scores level at 6-6 but Adcock and Bankier eased away to lead 15-8.

Their opponents saved four match points but could not prevent the Britons reaching the last four, where they will face top seeds Tontowi Ahmad and Liliyana Natsir or fifth seeds Chan Peng Soon and Goh Liu Ying.