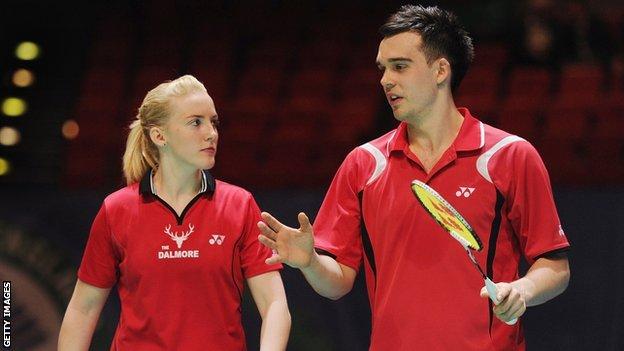 Chris Adcock and Imogen Bankier are close to breaking into the world top 10 despite losing in the Swiss Open mixed doubles semi-finals.

Adcock and Bankier beat their rivals for an Olympic place, Nathan Robertson and Jenny Wallwork, in round two.

Chris Adcock and Imogen Bankier beat Tontowi Ahmad and Liliyana Natsir in the semi-finals at the Yonex BWF World Championships at Wembley in August, on the way to a silver

Their conquerors in the semi-final are All England champions and were the top seeds. The Indonesians made a flying start, racing into an 8-1 lead and reaching the interval 11-3 ahead.

Adcock and Bankier fought back but the closest they got was within four points, at 19-15, before Ahmad and Natsir won the next two to take the opener.

The second game was far tighter and level at 13-13 before the Britons edged into a two-point lead at 17-15 and went on to level the match with a 21-16 success.

In the decider, the Indonesians again set the pace and led 5-2 but Adcock and Bankier reeled them in at 8-8 before Ahmad and Natsir reached the interval 11-9 ahead.

But then came a big push from the eventual winners, who won six of the next seven points, on the way to taking the decider.