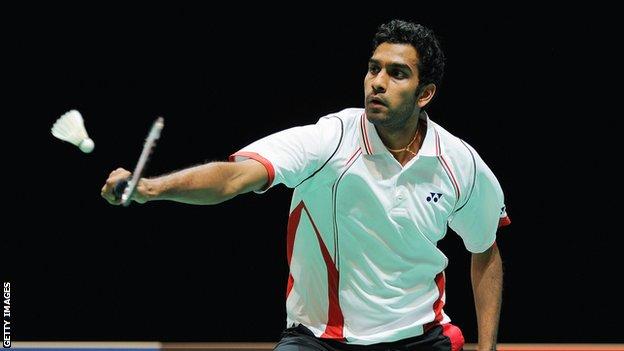 Rajiv Ouseph secured his third title of the season when he overcame Henri Hurskainen to be crowned Finnish Open men's singles champion.

Ouseph, who is set to represent Great Britain at the Olympics, trailed 17-14 in the first game before fighting back.

After losing the second game, he clinched victory on his first match point.

Rajiv Ouseph was crowned US Open men's singles champion in 2010

Ouseph, 25, scoops 4,000 ranking points for winning the tournament and he is now closing in on a return to the world's top 20 as he prepares for the European Championships in Sweden later this month.

The Finnish title follows pre-Christmas victories for Hounslow-born Ouseph in Scotland and Ireland.

British number ones Chris Adcock and Imogen Bankier made it a title double by taking the mixed doubles, but not without having to battle for the victory.

They lost the first game against Denmark pair Anders Skaarup Rasmussen and Sara Thygesen 22-24 before levelling the match 21-12.

Adcock and Bankier clinched the title after securing the third game 21-13.