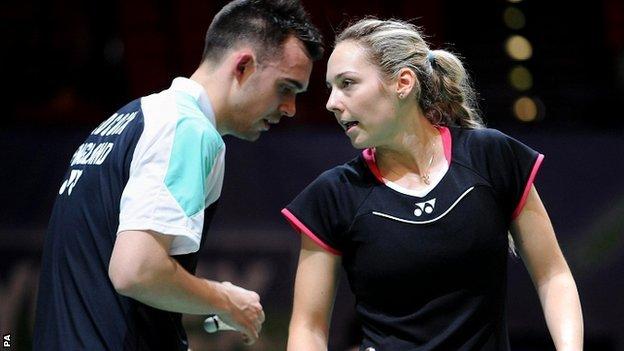 England's mixed doubles hopes Chris Adcock and Gabby White came through two rounds of qualifying to reach the main draw at the All England Open.

They then saw off Russians Vladimir Ivanov and Valeria Sorokina 21-8 21-17 to secure their progress.

England's Rajiv Ouseph and Scot Kirsty Gilmour both went out of the singles.

Adcock and White's reward for their two wins is a tough first-round match against China's Olympic silver medallists Xu Chen and Ma Jin.

"We have no pressure," said White. "We've got the world number ones next but that's how it goes. It goes in roundabouts.

"We can take from today all the positives from how well we played and take it into tomorrow and we are looking forward to giving the world number ones a crack."

White later teamed up with Lauren Smith to make the women's doubles first round with a 21-13 21-13 win against Indian fourth seeds Pradnya Gadre and Ashwinin Ponnappa.

Imogen Bankier, who won world silver with Adcock in 2011 before quitting the Great Britain badminton programme in October, teamed up with Bulgarian Petya Nedelcheva in the women's doubles to make it through with a 21-14 21-16 win over Dutch pairing Samantha Barning and Eefje Muskens.

"It was a really good chance for me to qualify and I'm quite disappointed with how I played but there are some things to work on to do better in the next tournaments," said Ouseph.

Third seed Gilmour was beaten 21-10 21-17 by France's Sashina Vignes in her first match.