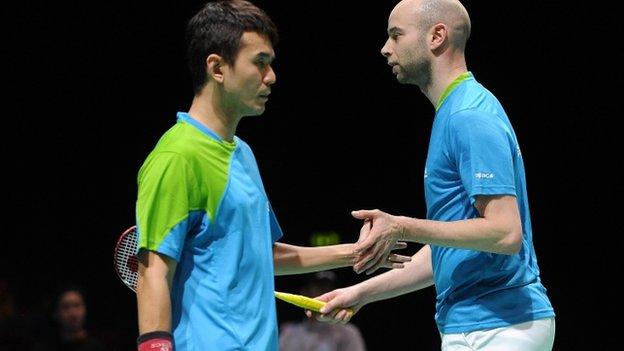 Robert Blair - the last British player in the All England Open Championships - has been knocked out of the tournament in Birmingham.

The Scot and his Malaysian partner Tan Bin Shen were defeated by Japanese duo Hiroyuki Endo and Kenichi Hayakawa in the second round of the men's doubles.

Britain's badminton team have struggled on home soil and Blair was the only player to reach the second round.

"It's very disappointing because we started well," said Blair, who had to come through the qualifying rounds in Birmingham.

"But we haven't been practising that much together, so it's hard to get into a good rhythm.

"They seemed a bit worried with our style of play but changed their tactics a bit and that proved the end for us."

Blair will now head for next week's Swiss Open where he and Tan, a team-mate from club badminton in Germany, will again have to qualify.