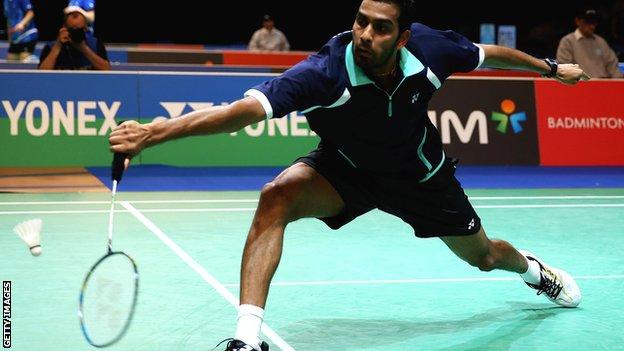 English number one Rajiv Ouseph made an early exit on the opening day of the World Championships in China.

The Commonwealth silver medallist was beaten 21-11, 21-15 by Malaysian 15th seed Chong Wei Feng in the first round.

The left-hander from Walton-on-Thames, ranked 75 in the world, controlled the first game but had to come from 10-5 and 12-9 down in the second to seal it.

He will face Germany's 11th seed and European champion Marc Zwiebler for the first time in the second round.

Republic of Ireland's Scott Evans was beaten 21-11 21-15 by Malaysia's world number one Lee Chong Wei, who is favoured to meet China's reigning world champion Lin Dan - an easy 21-6 21-9 winner over American Sattawat Pongnairat - in the final.

Scotland's Alistair Casey also went out in the first round, beaten 21-6 21-18 by Japan's Sho Sasaki.

English champions Chris Langridge and Heather Olver were surprisingly knocked out in the first round of the mixed doubles, losing 22-20 13-21 21-13 to Swedish pair Nico Ruponen and Amanda Hogstrom.

Ranked 21 places higher than their opponents, the English pair were unable to convert a game point at 20-19 in the opener after recovering from 17-15 down. They did fight back to level, but could not sustain their momentum.

Olver returned later in the day to partner Kate Robertson to a 23-21 21-14 victory in the women's doubles over Kai Hsin Chiang and Pei-Ling Tsai of Chinese Tapei.