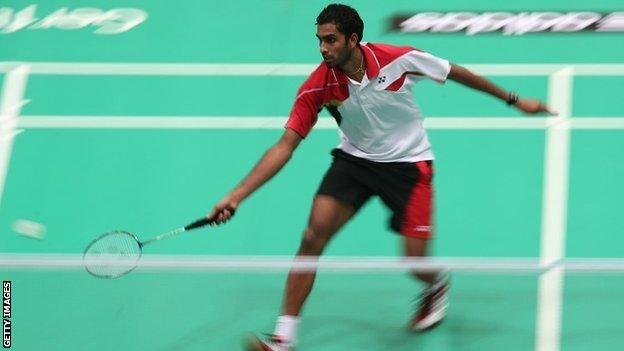 Gilmour, 20, won 21-13 20-22 21-16 and will face Carolina Marin in Sunday's final after the Spaniard beat Thai number one seed Busanan Ongbumrungpan.

England's number one Rajiv Ouseph lost to China's Tian Houwei in the semi-finals of the men's singles.

But compatriots Chris Langridge and Heather Olver are through the final of the mixed doubles.

They beat Singapore's number one seeds Danny Bawa Chrisnanata and Yu Yan Vanessa Neo 21-15 21-15 to set up a match against German pair Michael Fuchs and Birgit Michels, who edged past Indonesians Irfan Fadhilah and Weni Anggraini 19-21 21-19 22-20.

In the women's singles final Gilmour, who won the Czech International last week, meets Marin, a 20-22 21-18 21-19 victor over Ongbumrungpan.

Gilmour said: "Kristina is a good player so I am just really happy to get through."

Ouseph said: "I was a bit disappointed.

"I started quite well in the first game, I just wasn't able to sustain it for as long as he could. I just made a few more errors in the middle of both games."