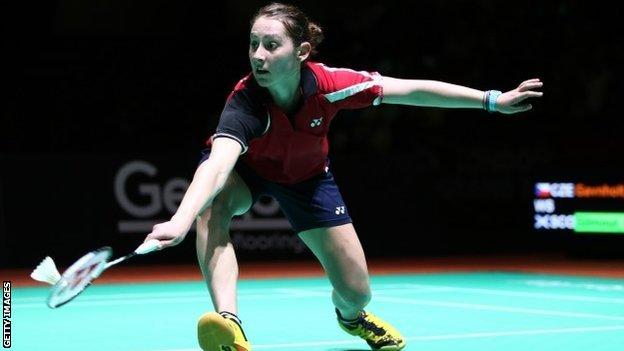 Scotland's Kirsty Gilmour missed out on a maiden Grand Prix title after Spanish third seed Carolina Martin fought back to beat her in London.

English champions Chris Langridge and Heather Olver also had to settle for silver after defeat in the mixed doubles final at the Copper Box.

Gilmour is ranked 34th in the world and won the lower-ranked Czech Open last week.

However, Martin is the world number 20 and demonstrated in the latter stages of the final why she was able to beat top seed Busanan Ongbumrungpan of Thailand in the semi-finals.

"We came all the way through the junior ranks together but we've never actually played each other," said Gilmour. "There was a lot of trying to work one another out early on and I had a bit of a jump on her, but she managed to claw it back.

"I'm going to take a lot of positives from that and I'm enjoying having a bit more expectation on me now.

"I'm looking to step up the level of competitions that I do and I can't wait to compete at the Glasgow Grand Prix later in the year. That will be a great test ahead of the Commonwealths."

Langridge, 28 and Olver, 27, beat favourites Danny Bawa Chrisnata and Yu Yan Vanessa Neo from Singapore in the previous round, but could not overcome the second seeds.

They hope the experience will serve them well leading into a crucial qualifying period for the 2014 Commonwealth Games in Glasgow.

"It is gutting," Langridge told BBC Sport. "You don't get many tournaments in your back yard, but that's how it goes in sport sometimes."

Olver added: "We need to forget this final now, but I don't see why we can't get selected for the Commonwealths, or even win a medal there.

"We've had good results earlier in the year and I feel we are on track."

It was the third time Houwei, 21, had beaten a seeded opponent in London, including an impressive victory over top seed - and world number five - Jan O Jorgensen earlier in the competition.

"I still have a lot to learn but this is one of my first big tournaments and I hope there will be many more trophies," Houwei told BBC Sport.

Kruse and Roepke were on course for an upset after taking the opening set 21-12, but Pedersen and Juhl found their range in the second set to take it 21-17.

The world number three pair were at their dominant best in the decider, powering to a 21-15 victory.

"They had the right tactic against us at the beginning and we were a little bit too nervous on the court," said Pedersen, who won bronze in the mixed doubles at the 2012 Olympics.

Although a number of the world's leading players - including Olympic champions Lin Dan and Li Xuerui - skipped the event because of forthcoming Superseries events in France and Denmark, many established players did attend the inaugural event in London.

Pedersen added: "We are so happy to be back. We have good memories from last year and we love playing here in England where the crowd is fantastic."