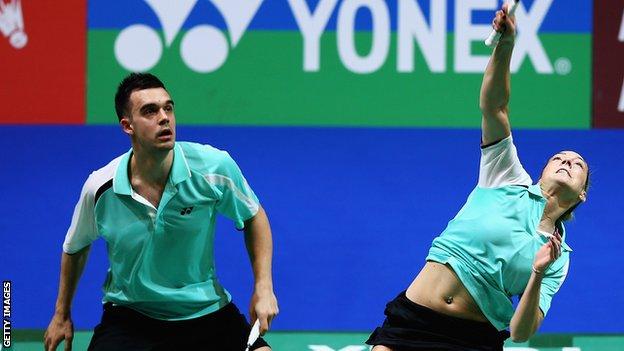 England mixed doubles pair Chris Adcock and Gabby White are out of the French Open after a semi-final defeat by Olympic champions Zhang Nan and Zhao Yunlei in Paris.

Unseeded pair Adcock and White looked to be on course to beat the Chinese top seeds after winning the first game.

They will face compatriots Jin Ma and Chen Xu or Thailand's Sudket Prapakamol and Saralee Thungthongkam on Sunday.

Adcock and White had reached the last four with a victory over world champions Tontowi Ahmad and Liliyana Natsir of Indonesia.

They were looking to avenge the 21-23 21-16 21-5 defeat they suffered against Zhang and Zhao at last week's Denmark Open.

But the Chinese pair, who won that tournament in Odense, wore their opponents down and closed out the final game comfortably.