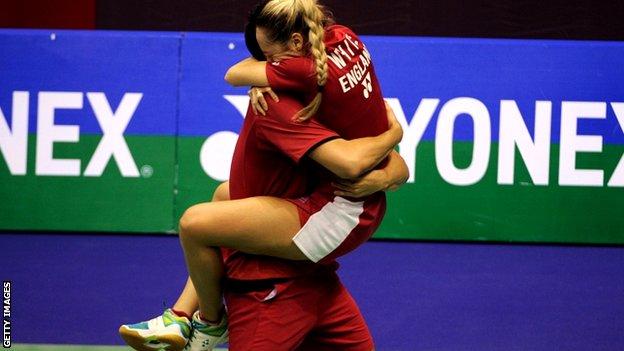 The husband-and-wife team beat China's Cheng Liu and Bao Yixin 21-14 24-22 to become only the second English pairing to win on the Superseries circuit.

Men's doubles duo Nathan Robertson and Anthony Clark were the first in 2009.

Adcock, 24, and White, 23, had already beaten Olympic champions Zhang Nan and Zhao Yunlei in the semi-finals.

"This is our proudest moment in our career so far," said Adcock.

"What a week we've had, firstly beating the world number one pair and Olympic champions in the semi-final and then going on to win the final in two straight games and stand on the top of the podium. It's just an amazing feeling.

"We have dared to dream about this moment for a long time and to achieve it feels great."

They dominated the first game but had to come from behind in the second with the Chinese duo leading 20-15 before a six-point burst gave Adcock and White their first match point at 21-20.

Their opponents responded to hold game point at 22-21 before Adcock and White took the next three points to clinch victory after 40 minutes.

The English pair, who married in September, are now likely to move up from their current world ranking of seven ahead of next month's grand finals of the 2013 Superseries circuit in Kuala Lumpur.

"Wow! Can't describe the feeling right now! One of my dreams finally accomplished!" White tweeted. "It couldn't have been done without all the support from the staff and everybody who has helped me along the way! Hopefully the first of many!"

Adcock, who won a World Championship silver in 2011, added: "SPEECHLESS....can't explain how happy I am right now!! Our first SS win!! an unbelievable week!!!!!"