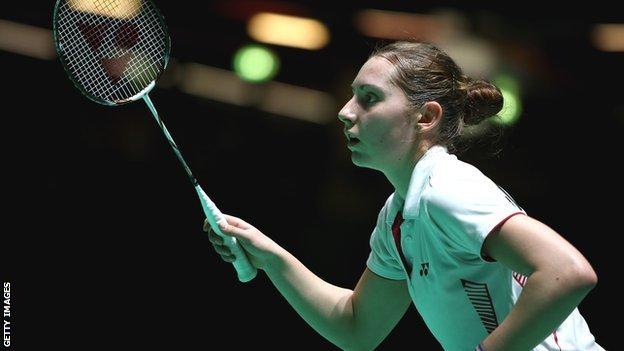 Kirsty Gilmour's Commonwealth Games preparations have been boosted by lifting the women's singles title at the Caperio Swedish Masters in Uppsala.

Gilmour, from Bothwell, was runner-up at the London Grand Prix and the Scottish Open Grand Prix in the autumn.

Robert Blair and Imogen Bankier came from behind to win the mixed doubles.

The top seeds and Scottish Open champions lost the opening game 21-16 against German second seeds Peter Kaesbauer and Isabel Herttrich but hit back to force a decider by taking the second game 21-7.

In that third game the Scottish pair needed all their experience to come from behind three times, finally turning a 17-15 deficit into a 20-17 advantage before taking the match 21-18 on their second match point after 47 minutes.

Like Gilmour, Blair and Bankier provide Scotland with a medal chance at Glasgow 2014.

They defeated Russian Olympic bronze medallist Nina Vislova and her partner Anastasia Chervaykova 21-13 15-21 21-11 but had to face second seeds Marie Roepke and Line Damkjaer Kruse in the semi-finals and were edged out in the closest of contests 21-14 22-24 22-20.

The Scots saved a match point at 20-19 before taking the second game to force a decider and the Danes needed five match points to clinch their place in the final after Gilmour and Bankier recovered from 20-16 down to draw level at 20-20.