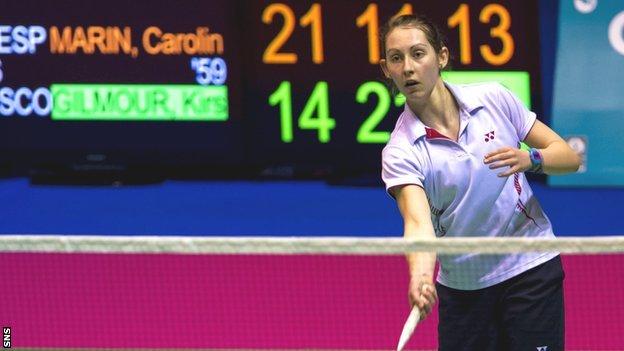 The 20-year-old from Hamilton is now the third highest ranked player from a Commonwealth nation in the countdown to Glasgow 2014.

On Wednesday she starts her Yonex German Open challenge in Mulheim.

She also teams up again with Jillie Cooper in the women's doubles where they face Japanese fourth seeds Reika Kakiiwa and Miyuki Maeda.

The German event is the perfect preparation for next week's Yonex All England Open Championships in Birmingham when she gets the chance to test her Commonwealth credentials against Saina Nehwal in a first-round match.

The Indian star is the reigning Commonwealth champion and, at number seven, is the highest-ranked women's singles player from a Commonwealth nation. Another Indian player, PV Sindhu, is at number nine.

In Mulheim, Scottish Open Grand Prix winners Robert Blair and Imogen Bankier tackle the mixed doubles where they face Indonesian pair Alfian Eko Prasetya and Annisa Saufika in the first round with the prospect of taking on England's Chris and Gabby Adcock in the second round.

The four know each other well. Blair used to partner both the Adcocks while Chris Adcock won a world silver medal with Bankier in 2011.