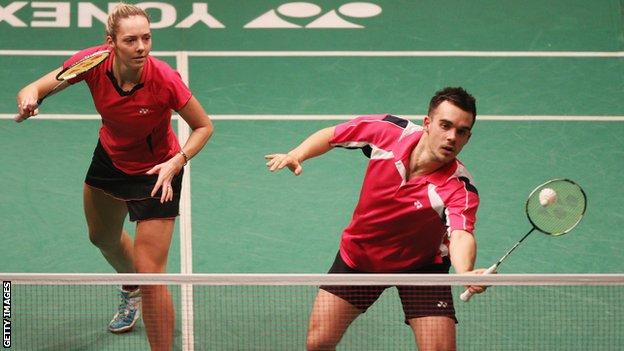 Britain's leading contenders will be in action when the first round of the All England Open Championships begins in Birmingham on Wednesday.

Adcock and White reached a career-high fifth in the world rankings when they won the Hong Kong Open last November.

World number one and top seed Lee Chong Wei of Malaysia will bid for his third All-England title in the men's singles.

Last year's winner Chen Long of China defends the crown he won in 2013 at Lee's expense.

Lee's chances at the National Indoor Arena have been enhanced by the absence of China's Lin Dan, who became world champion for the fifth time when injury forced Lee to retire in their meeting in the World Championship final last August.

Rajiv Ouseph, who captained England to a silver medal in the recent European Team Championships, is the leading British hope in the men's singles.

The men's doubles features two pairs who came through the tournament's qualifying stage this week to make the first round.

Marcus Ellis and Tom Wolfenden capitalised on late withdrawals to win their two qualifying matches to earn a meeting with England's Chris Langridge and Peter Mills.

"It's fantastic considering we were reserves the day before the tournament, but I do we feel like we've performed really well and deserve to be here," said Ellis.

"We are up against a fellow English pair. It will be an interesting game but it's a great opportunity for us. I genuinely think we can ruffle a few feathers."