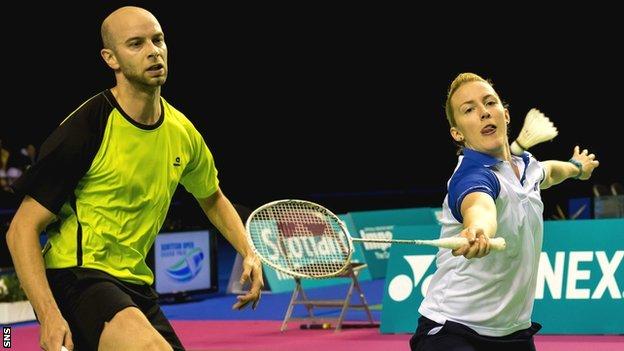 Imogen Bankier won the mixed doubles and women's doubles titles at the French International in Orleans.

Bankier and Robert Blair retained their crown on Sunday at a tournament which 12 months ago was the launch pad for their rise to number 15 in the world.

Bankier then partnered Petya Nedelcheva to win the women's doubles against Bulgaria's Gabriela and Stefani Stoeva.

They defeated the tournament's third seeds 21-14 21-7, making up for their semi-final disappointment in Orleans last year.

The pair didn't drop a game on the way to the title and Bankier's double will put her in good spirits for next month's European Championships in Russia.

As top seeds with Blair in the mixed doubles, the Scots could have won in straight games if they had been able to convert an 18-16 second-game lead.

Instead they had to come through a close deciding game as the Danes caught up from 15-12 down to remain level at 17-17 before the Scots won two points in a row at 19-18 to take the title.

It was the third three-game victory for Blair and Bankier, having beaten Patrick Buhl and Rikke Hansen of Denmark 21-17 19-21 21-15 in the second round and knocking out Dutch third seeds Jorrit De Ruiter and Samantha Barning 18-21 21-12 21-14 in the semi-finals.

At the beginning of March, Bankier won another double, winning the mixed doubles title at the Yonex German Open the same weekend as she won the Glasgow Leader's Special Award.