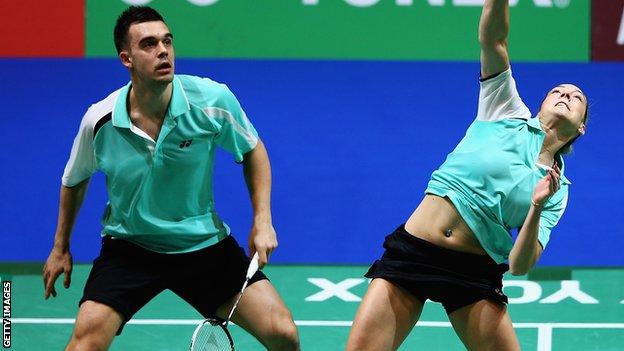 England's Chris and Gabby Adcock target their first European badminton title this week as they pursue the world number one spot in mixed doubles.

"We believe we can get there, we have the same drive," said Gabby Adcock of a partnership ranked fifth at the moment.

The draw may set up a meeting in Kazan, Russia with Scotland's Robert Blair and Imogen Bankier.

"On our day, we're the better pair," said Chris Adcock, who partnered Bankier at London 2012.

Chris Adcock and Imogen Bankier competed for Team GB at London 2012 before going their separate ways.

Imogen Bankier: "We'd lost the edge of anonymity we had when we won world silver a year earlier - people had worked us out a bit.

"When I look back at London and my whole experience, I didn't enjoy it. That's quite sad, everyone else enjoyed it and I didn't.

"So first of all, I want to enjoy my home Commonwealth Games, in my home city, and feel lucky to be a part of it."

Chris Adcock: "London really didn't go the way we planned it, but I enjoyed it a lot. I enjoyed being a part of it and I loved every minute out on court. Some people might find that strange, and I know some people didn't enjoy it.

"If we do end up playing Robert and Imogen at Glasgow 2014, they'll have the home crowd but there'll be a lot of England supporters there.

"The tough thing is we have the World Championships two weeks after that. We've been told that's our main focus in terms of our UK Sport funding goals, with the Commonwealths as the build-up to that."

Adcock and Bankier won an unlikely world silver medal together in 2011, but lost all three group matches at the Olympic Games in London.

"London 2012 was the low point of my whole career," Bankier, 26, told BBC Sport. "We always thought, on our day, we could beat the best players but it just didn't happen.

"Afterwards there was a lot of focus on Rio. The Commonwealth Games weren't on Team GB's radar as we represent Scotland and England separately, but the Commonwealths is such a big event for me, in my home city."

The European draw will pitch Bankier and Blair, currently 15th in the world, against the Adcocks if both pairs reach the semi-finals. That would provide a taste of the England-Scotland rivalry likely to feature at Glasgow 2014.

"You know each other so well and there's a bit of second-guessing, but they are obviously very good players," said Chris Adcock, 24, of the Scots.

"We played them a few months ago at the German Open and they won the tournament, so you have to give them credit for how they're playing. The England-Scotland rivalry gives it an extra edge."

Bankier said: "We'll come up against English players plenty of times and it's more appealing to the public than us. It's never particularly pleasant playing people you know, it's not an encounter you look forward to.

"Playing Chris and Gabby is very much at the back of my mind at the moment. If we get to that stage I'd be extremely pleased."

Gabby Adcock: "Finally it's up and running, and everyone is excited to get it going. We're all 100% supporting it - if we can get more people playing badminton and get it on TV, then it's perfect."

Chris Adcock: "There are six match-nights in the season, then a finals weekend. At least one game each match-night will be televised.

"There's definitely a market out there and if you're playing world-class badminton in front of people on home soil, that can only help to inspire kids to play."

Last year, the Adcocks won their first major title - the Hong Kong Open - and carried their form into 2014 by winning the Swiss Open.

Chris Adcock said: "We've not settled for where we are. The top four is the aim and the big number one after that. The gap between five and one is big but we're coming into the European Championships on good form and we want to win it.

"We've got quite a tough draw, such as the Danish pair in the second round, who are ranked world number four.

"But if you're getting to European gold then you're pretty-much putting yourself into the top four in the world, and we know our level is good enough."

China have the mixed doubles teams ranked first and third in the world, with Indonesian and Danish players rounding out the top four.

Bankier and Bulgaria's Petya Nedelcheva are seeded fourth together in the women's doubles, with Bankier and Blair the fourth seeds in mixed doubles.

Kirsty Gilmour is seeded second for Scotland in the women's singles, while England's Rajiv Ouseph is seeded fifth in the men's event.