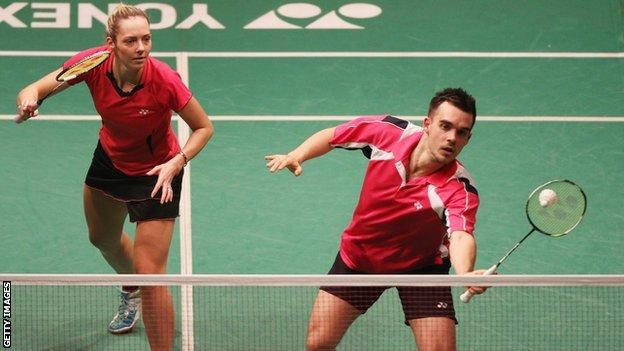 England's number two seeds Chris and Gabby Adcock suffered a shock last-16 exit in the mixed doubles at the European Championships in Russia.

Scotland's Imogen Bankier and Robert Blair, however, reached the quarter-finals in straight sets.

And both Adcocks progressed to the quarter-finals with their respective men's and women's double partners.

In February, Gabby and Chris Adcock achieved a career-high ranking of fifth in the world

The Adcocks, who are targeting the world number one spot in the mixed doubles, were on course to meeting Bankier and Blair in the semi-finals.

But despite winning the first game, they went down in three to the Danish pair to whom they lost last year in their only previous meeting.

Adcock and her partner Lauren Smith did manage to beat Russian pair Irina Khlebko and Ksenia Polikarpova 21-14 21-18 to reach the last eight of the women's doubles.

Her husband Chris, meanwhile, teamed up with Andrew Ellis to beat Dutch duo Ruud Bosch and Koen Ridder in three games to reach the same stage of the men's doubles.

Bankier,looking to at least match the mixed doubles bronze medal she won with Adcock two years ago, teamed up with Blair to beat Anatoliy Yartsev and Evgeniya Kosetskaya 21-15 21-18.

In the men's singles, England's fifth seed Raj Ouseph beat Dmytro Zavadsky 21-17 21-16 to set up a last-eight tie with Hans-Kristian Vittinghus of Denmark.

However, Scottish second seed Kirsty Gilmour lost 21-13 21-19 to Turkey's Ozge Bayrak in the third round of the women's singles.