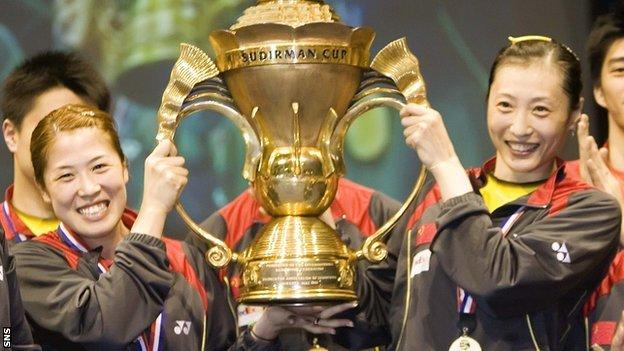 Badminton Scotland is bidding to host the Sudirman Cup in Glasgow in 2017.

The tournament is the world mixed team championship and is held every two years, with China the dominant nation.

The city staged the tournament in 1997 and 2007 and the sport's governing body is being backed to host it a third time by Glasgow City Council, UK Sport's Gold Event Series and EventScotland.

It will host the badminton at the Commonwealth Games this summer.

Smillie said her organisation and the funding partners "have a strong track record of running world-class events in Glasgow" since staging the European Championships at the Kelvin Hall International Sports Arena in 1992.

She said: "Today we have a fabulous new arena which is perfect for world-class badminton.

"The Emirates Arena has already played host to the Scottish Open Grand Prix and badminton fans coming to the Commonwealth Games this summer will be able to see first-hand just how good the facilities are there.

"On top of that Scotland fans know we have built a strong squad of players, with the current team defeating higher-ranked nations to finish top of Group Two at last year's Sudirman Cup in Kuala Lumpur.

"Many of the current squad are young enough to still be competing three years from now for what will be the 15th Sudirman Cup."

The Badminton World Federation Council will decide where the tournament is to be held when it meets in October.

Smillie added: "The bid team will be working hard during the Commonwealth Games and at the World Championships in Copenhagen in late August to showcase everything that Glasgow can offer in staging world-class badminton."

UK Sport is investing around £27m to bring up to 70 major championships to the UK through its Gold Event Series by 2019 to build a strong legacy from hosting the London Olympics and the Glasgow Commonwealth Games.

In addition to the Games, Glasgow will host Diamond League athletics at Hampden Park in July.