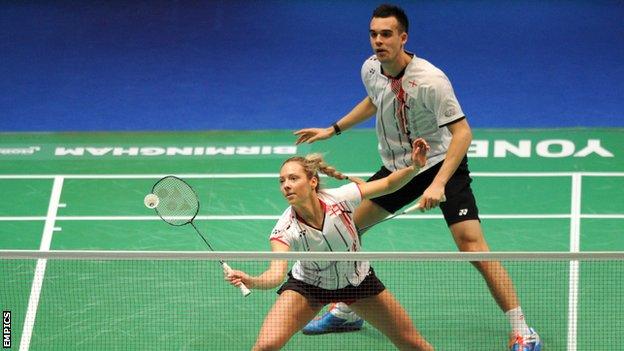 Commonwealth champions Chris and Gabby Adcock have reached the quarter-finals of the All England Open Championships.

The married mixed doubles pair, out to become the first British winners since 2005, beat Indonesia's Kevin Sukamuljo and Greysia Polii 21-12, 21-18.

They will face three-time defending champions Tontowi Ahmad and Liliyana Natsir, also from Indonesia, on Friday.

Rajiv Ouseph also reached the third round for the first time in his career by defeating India's Prannoy Kumar.

Athens Olympic silver medallists Nathan Robertson and Gail Emms were the last Britons to win the event, known as badminton's answer to Wimbledon, when they took the title in 2005.

The Adcocks have spoken of their desire to end the wait for British success.

However, their next opponents - Ahmad and Natsir - have not lost a mixed doubles match at the All England Championships since 2011, when they were beaten by German pair Michael Fuchs and Birgit Michels in the second round.

"Hopefully having the crowd behind us will help," Chris said. "We know we have the level within us to win."

He added: "We will have to adapt quickly to them, because they're capable of making the game change quickly."

Gabby said: "We are playing well and take a lot of confidence from that, which we know we'll need heading out against this pair.

"They haven't lost here in a long time but hopefully we can be the ones who turn it on."

England men's number one Ouseph produced the shock of the first round on Wednesday by defeating third seed Son Wan-Ho of South Korea.

The 28-year-old admitted the effort was partly responsible for his slow start against second-round opponent Kumar.

"Yesterday definitely took its toll on me but I worked by way into the match and improved," he told BBC Sport.

"It's been a challenge through my career to back up win after win and I think eventually I'm now starting to do that.

The Englishman will face Japan's Sho Sasaki for a place in the semi-finals.

The All England Open Championships run until 8 March with all finals taking place on Sunday.