Chris and Gabby Adcock are one of those couples that finish each other's sentences.

Some might find it annoying, others cute. But when your significant other is also key to winning Olympic gold, being so perfectly in tune can be essential.

Having been together for 10 years, the Adcocks are finally realising their potential, becoming the first Britons to win a World Superseries title, badminton's equivalent of tennis' ATP Tour finals.

The victory in Dubai came in some style too, cruising to straight-set victories in the semi-finals and final, having topped their group and beaten the world number two pair in the process.

Chris, 26, adds: "Having those titles will hopefully give us confidence for Rio. If we play our best, we can beat anybody."

They are not the first couple to grace British badminton, but after meeting through the sport in their teens and marrying in 2013, they are planning to be the most successful.

BBC Sport has been finding out what makes the Adcocks tick.

Although not strictly on the plane to the Olympics yet, the world number seven pair's form and ranking points all but assure them a place in the mixed doubles in Brazil.

They believe being free from the insecurity of qualification, coupled with the win in Dubai keeping them on an upwards trend, could propel them to success on the biggest stage.

"Not having to worry about qualification and focusing on winning is such an advantage," says Chris.

"Of course we want a medal but I want to play well. I know if we play well we've got a chance. It's a challenge but it's something I know we can do."

Having grown up as a formidable mixed doubles pairing, the Adcocks were controversially split up prior to London 2012.

The rationale was placing each with a more experienced partner to boost their chance, a move they both agree was tough, but ultimately right at the time.

As Gabby was unsuccessfully paired with Rob Blair, Chris joined up with Imogen Bankier, leading to reports that he had 'dumped' his girlfriend but Gabby says rumours her and Bankier did not get on were "rubbish".

"It was made a lot worse than reality," she adds.

"We were training together that morning and I got a text saying there's going to be something in the paper," Chris says.

"We opened it up and it said I was like a love rat. I couldn't believe it. Behind closed doors we had a good laugh about it."

Bankier and Chris won world silver in 2011, but were knocked out early in London.

So, did the fact that the initial decision resulted in joy for Chris and despair for Gabby affect their relationship?

"Honestly no! These are the experiences that make us stronger," says Chris.

Gabby adds: "When I was watching him at the Olympics I didn't think of me not going, In that moment I was so proud."

"I'm obsessed with him," Gabby beams, and a quick scan of her Twitter feed confirms the statement.

Cuddled together in picture after picture, a cute couple with love in their eyes - only it is not Chris with Gabby but Bowser, their pet dog.

Yet with tournaments in destinations like Kuala Lumpar, Jakata and Dubai, it means being away from home for large periods of time - not an ideal situation when the other person that cares for your pet is travelling with you.

"It's the most illogical thing we've ever done," says Chris. "We travel together so don't miss each other. The biggest thing we miss is Bowser."

"Chris' dad was so against it," adds Gabby, whose parents look after Bowser when they are abroad.

"He is worth every second," says Chris. "He's such a release for us. When you get home from training, he greets us with a squeak and brings you straight back to normal life."

As they are a pair that needs to work together for an end goal, psychology is pivotal in ironing out underlying tensions.

For Gabby and Chris, those tensions might not actually be on the court, but stem from their personal relationship.

"I always say we have couples therapy," jokes Gabby. "He's the nicest guy and we meet up regularly as a friend."

So close is their relationship that upon sitting with Drane for the first time since reuniting as a pair at the end of 2012, the two decided to have some fun.

"I said Gabby and I were having a bit of an issue," recalls Chris. "Simon was rubbing his hands that he'd have something to work with.

"I said that Gabby hates it when she's in the shower and then I go on the toilet. His mouth just dropped and he must have wondered what he'd go himself into.

"We waited a few seconds whilst he stumbled for words and then burst out laughing." 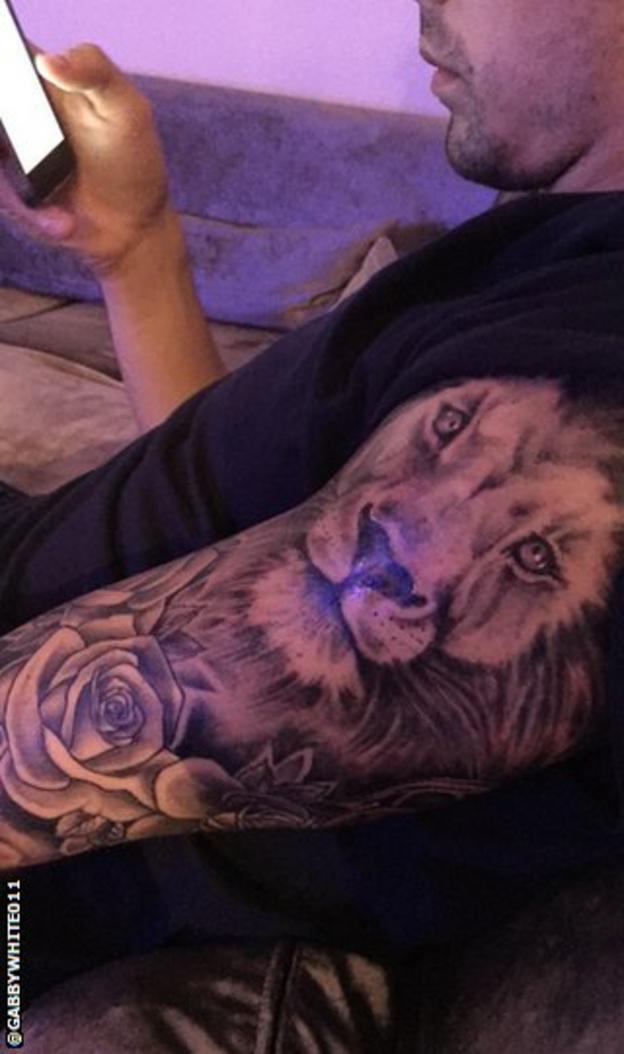 With matching wedding date tattoos, the two are not adverse to a little body modification.

However, Chris played his most recent tournament in a sleeveless top - and had forgotten to inform two people in particular about his tattoo.

"They watch the live streaming and I said to Chris they're going to find out."

Chris adds: "I got a text from mum saying 'Christopher'.

"That's when I know I'm in trouble. 'What is that on your arm. I hope you're stopping there.'

Chris has the Olympic rings adorning his body and Gabby now hopes to match her husband having missed out on London 2012.

"They are very addictive," she said.

"Having missed the first one, it's important to me. I won't get the rings before Rio though."

Being two of the best badminton players in the world, you would imagine Chris and Gabby were handy at physical education at school.

Whilst Gabby takes great pride in her A* at GCSE, she takes even greater pleasure from beating Chris, who scored zero on his practical exam.

"I got a B," he says. "But I did break my leg when I was doing my GCSEs playing badminton.

"When the school came to give my practical, they said we'll give you a 10 as you're European champion. The exam board wouldn't accept it because they hadn't seen me play."