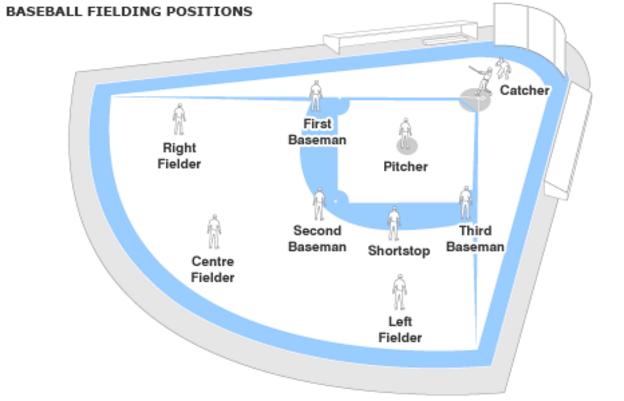 Teams consist of nine players and take turns fielding and at batting, with the home team batting second.

An inning consists of batters from each team taking their turn at bat until three batters are out. A game lasts nine innings, but is extended into extra innings if the scores are level.

The fielding side consists of a pitcher, catcher, four infielders, and three outfielders.

The pitcher throws overhand, using a variety of deliveries from a raised mound to the home plate - a distance of 60.5ft (18.4 m).

An opposing batter attempts to hit the pitches and then get on base, while the fielders attempt to get the batter out through various plays. 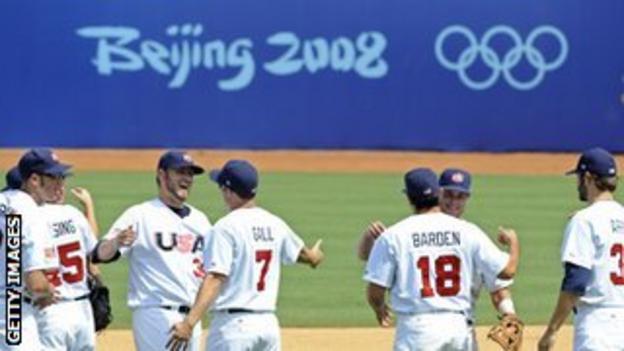 A batter who misses three legitimate pitches, or fails to swing at three judged hittable by the umpire, is out on strikes.

But if the pitcher throws four pitches outside the strike zone, the batter obtains a base on balls, and gets a walk to first base.

A strike is also called when the batter swings at a pitch whether it is deemed to be in the strike zone or not.

A run is scored every time a batter becomes a runner and crosses home plate after touching each base in the prescribed order.

When the fielding team gets their opponents' three batters (or runners) out, the teams swap roles.

If the score is level after nine innings, play continues into extra innings until one team has scored more than the other in an equal number of turns at bat.