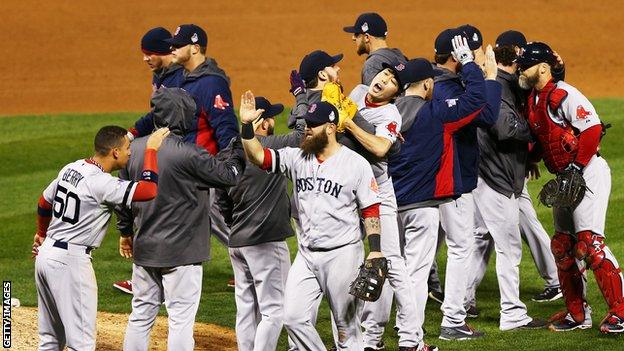 Boston Red Sox tied the best-of-seven World Series at 2-2 with a 4-2 victory against St Louis Cardinals.

Left fielder Jonny Gomes, only playing because of a late injury to Shane Victorino, hit a three-run home run off relief pitcher Seth Maness in the sixth inning, silencing a record crowd of 47,469 at the Cardinals' Busch Stadium.

The Red Sox went into the game on the back of successive losses while starting pitcher Clay Buchholz, struggling for fitness, lasted only four innings.

Key fielding errors were a feature of those Red Sox defeats and another error by Jacoby Ellsbury gave experienced slugger Carlos Beltran the chance to drive in the first run of the game for the Cardinals in the third inning with a double.

Red Sox shortstop Stephen Drew tied the game for the American League side in the fifth inning, his sacrifice fly driving in David Ortiz, before Gomes made it 4-1.

Matt Carpenter cut the deficit to 4-2 in the bottom of the seventh inning when his single scored St Louis pinch hitter Shane Robinson.

But John Lackey, working as a relief pitcher for the first time in nine years, and closer Koji Uehara prevented any further Cardinals runs.

The game ended when Uehara picked off pinch runner Kolten Wong, who was trying to steal second base.

The talismanic Ortiz, who had three hits and a walk in the game, was seen rallying his teammates in the away dug-out ahead of the pivotal sixth inning.

He said: "You think you're going to come to the World Series every year, you're wrong.

"I told them, 'It took me five years to get back on this stage, and we had better teams than what we have right now, and we never made it. Take advantage of being here'."

The game followed Saturday's highly controversial win for the Cardinals which turned, for the first time in World Series history, on a disputed obstruction call.

Game 5 takes place at Busch Stadium on Monday evening, before the teams return to Boston for Game 6 - and a deciding Game 7 if required.