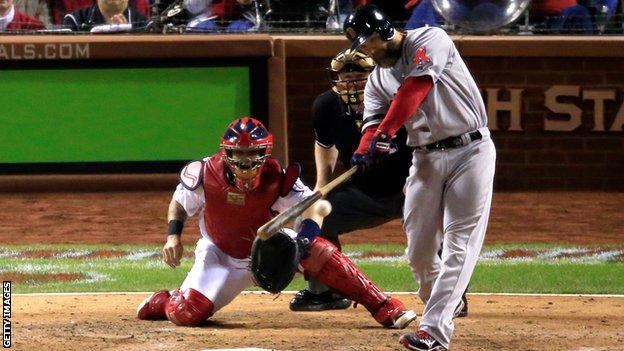 Boston Red Sox are only one victory away from winning the World Series for the third time in 10 years after beating the St Louis Cardinals 3-1 in Game 5 of the 2013 Fall Classic.

The win, Boston's second in a row at the Cardinals' Busch Stadium, means they lead the series 3-2 and have to win just one of the final two games scheduled at their Fenway Park home.

It was the second time left-hander Lester, who was treated for a form of blood cancer known as non-Hodgkin's lymphoma in 2006, has won a game in this World Series against Wainwright - who won 19 games during the regular season - after the pair faced each other in Game 1.

Lester used the cutter - a fastball pitch that breaks slightly as it crosses the batting plate - to great effect, allowing onlyfour hits and striking out seven Cardinals batters in seven and two-thirds innings.

Wainwright, too, pitched six strong innings, but in the seventh inning, a double by catcher David Ross followed by a base hit by centre fielder Jacoby Ellsbury scored two runs after third baseman Xander Bogaerts and shortstop Stephen Drew had reached base.

The Red Sox got off to a good start in the first inning when their veteran slugger David Ortiz, who is having an outstanding World Series, hit a double, scoring second baseman Dustin Pedroia.

Ortiz later hit a single, which enabled him to get on base successfully for the ninth successive time in this series - tying a World Series record.

His batting average for the series is .733 - meaning he records a hit 7.33 times out of every 10 "at bats", when any batter who averages more than .300 (three hits per 10 at bats) over a season is considered excellent.

But Lester closed the Cardinals down from there, with Red Sox closing pitcher Koji Uehara recording the final four outs.

Lester said: "It doesn't matter how many games at this stage you play, your nerves are going, your heart rate is going.

"It's a matter of realising it's baseball - fastball down and away - in game five of the World Series, that is just as effective as 1 February."

The 2013 series has featured a run of tight and tense games between closely-matched sides.

Pitchers have held the upper hand, with scoring opportunities at a premium.

The series returns to Fenway Park on Wednesday for Game 6 - with a possible deciding game seven the following night if St Louis level the series on Wednesday.