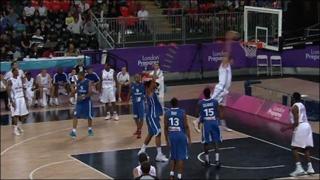 Great Britain are beaten 82-60 by France in their opening game of the Olympic test event - the first competition to be held on the Olympic Park.

All of the 3,000 tickets on offer were sold as Games organisers checked the venue ahead of next summer.

Fans were treated to some lively play from a France team with six current NBA players in their squad.