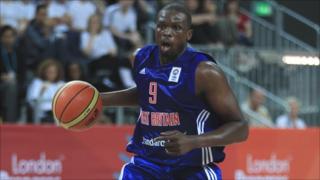 Great Britain fell to an agonisingly-close defeat to Australia in overtime in their final game of the 2012 Olympic test event, their 91-90 loss the fouth in five games in the tournament.

Britain fell 39-35 down in the first half but battled back from an Australian 10-point lead in the third to take the game to extra-time.

Luol Deng top-scored with 26 points whilst Joel Freeland put in another impressive performance to net 22.