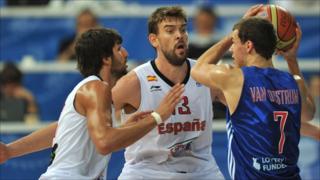 Great Britain are unable to match the experience of reigning champions Spain in their third consecutive defeat of the European Championships. as they lose 86-69.

Spain, with six current or former NBA players in their side, led by eight points at half-time and a 16-6 run clinched the game.