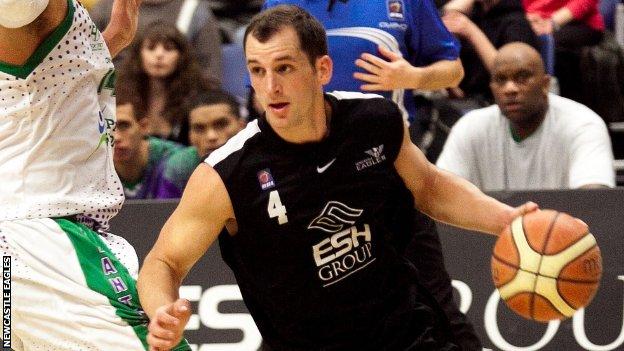 "Fab [Flournoy] sets the tone as player-coach but the players demand success as well so we won't take our foot off the pedal against Plymouth."

He added: "When we went down to Plymouth we had a good mindset, we knew we had to play at high levels because it was a tough atmosphere and they have a lot of talented players."

Eagles edged the Raiders in the final of the BBL Cup and BBL Trophy last season, with the second-leg of the latter final wrapped up at Sport Central.

"Anytime you play at a home gym you want home court advantage and the fans here do a good job of creating that," Huffman said.

"They create an atmosphere and make it a tough place to play."

Huffman's arrival on Tyneside in the summer after spells in Belgium and the Netherlands has proved a useful acquisition for the Eagles.

The 27-year-old has been a regular in the BBL team of the week since replacing the departed Paul Gause as the Eagles first-choice playmaker.

However he is keen to highlight the influence of senior players such as Flournoy, Joe Chapman and Charles Smith on the squad.

"The important thing to note is that when you have a lot of experience, that rubs off on the other players," Huffman continued.

"For new guys like me, Kareem [Maddox] it's good because you can lean on that in times of trouble, but fortunately we went down to Plymouth and played well and didn't need to rely on that experience."