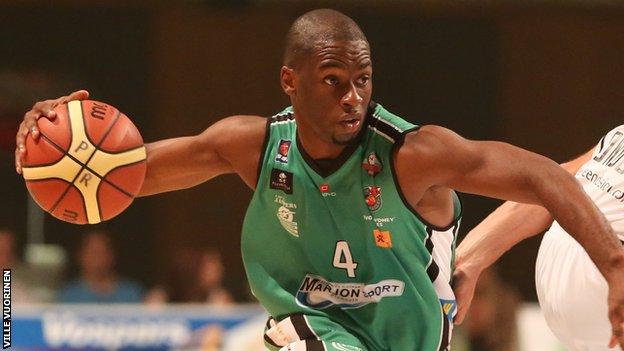 Plymouth Raiders boss Gavin Love says he is sad to have had to part company with point guard Jeremy Bell.

The 29-year-old has been in his native United States since before Christmas for undisclosed personal reasons and will not be coming back to the club.

The Raiders have brought in experienced veteran Rod Brown to replace Bell.

"We didn't have a clear idea of when he was going to return and because of that we had to make a move," Love told BBC South West Sport.

Bell, who was the league MVP in 2011, averaged 21.8 points per game in the BBL and Love says he will be difficult to replace.

"He's been here for the last year and a half and done a fantastic job, one of the reasons for our rise in success is because of him," Love said.

"We've parted ways amiably because we've always had a great relationship with Jeremy.

"He said he'd like to return to the club at a later date, but we couldn't go on with him missing four or five more games in a tightly contested BBL Championship.

"We had to do this for the club. He's a great guy but we'll miss him."

His replacement, 34-year-old Brown, who is originally from Dallas, has a British passport and has played top-flight basketball in Spain, Greece and Switzerland.

"He's not going to come in here and average 20 points per game like Jeremy," Love said. "But he's a pure point guard that can really run your team.

"He was second in assists in Switzerland last season so he's a guy that really wants to get everyone else involved and I think he'll be a really good fit here."