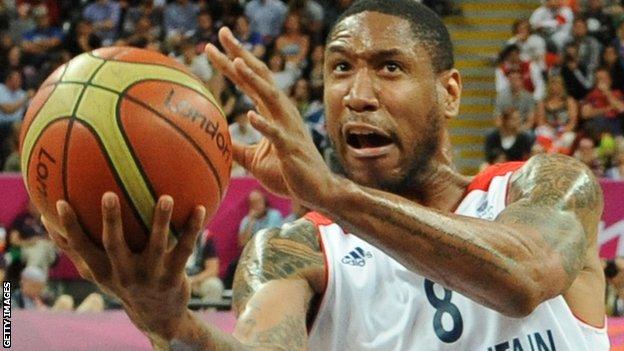 Leicester Riders survived a Newcastle Eagles fourth-quarter fightback to win the BBL Cup for the first time in 12 seasons 85-80 at Birmingham's NIA.

The Riders led 65-51 at the start of the final period, only for Newcastle to go into the lead.

But a three from Zaire Taylor with 1:16 remaining put Leicester back in charge.

Riders' Jay Couisnard (17 points) was named most valuable player, and Jamell Anderson and Anthony Rowe each added 15. Joe Chapman hit 27 for the Eagles.

Leicester's start was better and they led almost throughout, hitting three three-pointers in the first quarter - two from GB Olympic captain Andrew Sullivan and one from Anderson - to go in 20-17 ahead at the end of the first quarter.

In the second quarter they went on an 18-5 run inspired by Sullivan, Anderson and Slovakian signing Pavol Losonsky.

With Charles Smith, so often a match-winner for Newcastle in finals, struggling to find his scoring touch, Eagles reached half-time 45-36 in arrears.

Couisnard all but secured his MVP award in the third period, scoring 12 of his team's 20 points - including a triplet of threes - as the Riders stretched their advantage to 65-51 with 10 minutes remaining.

But when Smith scored a pair of twos and Chapman twice found player-coach Fab Flournoy for baskets in a 10-0 run that levelled the scores with 1:31 remaining, the Riders suddenly had to show their nerve.

Although they missed four of their next eight free-throws, another three from Taylor with 45 seconds remaining proved to be decisive.

"We knew Newcastle weren't going to quit and they were going to come at us with a run.

"Then big-shot Taylor... he's been doing it all his career - he did a lot of that at college.

"Anybody, any day, can be the MVP of any game. We're not a one-man or two-man team."

"We always fight to the end - it was just a classic battle. We just ran out of gas towards the end."

"We always think we're going to do it - because we're champions and we play like champions. At 1:30, we felt like we had a chance but then they made some big shots."

When asked whether Newcastle's two-week break before the final was significant, Chapman said: "I think [in the]first half it was - I think we didn't get into our rhythm as a team - our big guys couldn't really get their rhythm going.

"Sometimes having a couple of weeks off affects us like that but we're not going to use that as an excuse."