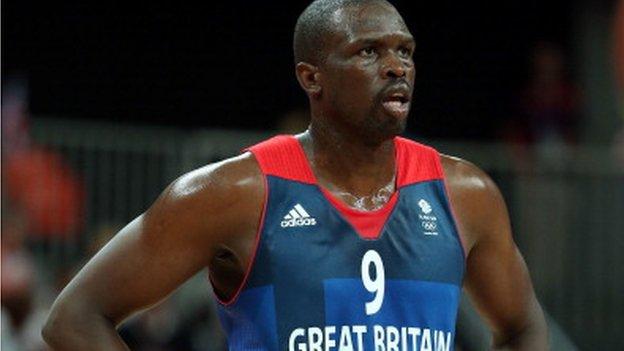 Chicago Bulls star Luol Deng has strongly hinted that he will not play for Great Britain this summer.

His loss would be a considerable blow to Britain's European Championship prospects, which would in turn impact the sport's plans for future funding.

Speaking at the NBA All Star Game, Deng said: "I haven't made the decision 100% [but] most likely I'm not [playing]."

Deng has rarely drawn breath since he first suited up for the GB team in 2007.

A major star in the NBA with the Chicago Bulls, he played more minutes than any other player in the league last season.

He has helped GB rise from obscurity to competing against more established nations.

Having originally said it was going to axe funding, UK Sport has just announced that it will continue funding basketball - but only for a year.

It will review the situation in light of how GB's men's and women's teams achieve in the next 12 months.

It's not too dramatic to say that GB's hopes rest on Deng's shoulders.

In Houston, Deng said: "I would like to have a season, or a summer - especially the summer coming up - (resting). Last summer I wanted to do the Olympics and I showed how much I wanted to do it.

"But this summer coming up I think I'll tone it down a little more but it doesn't change the fact that I'm with the team. I said that even before the Olympics."

Deng competed for Team GB at the London 2012 Olympics. While being knocked out before the quarter finals, they only lost by one point to eventual silver medallists Spain and beat China 90-58 to finish fifth in their group.

His likely withdrawal from the squad damages Team GB's chances of progression in the European Championships in Slovenia in September.

Future funding is linked to on-court performance, but Deng added: "This is not about the team getting the money or not, this is my decision. We have a lot of good players on the team to still be successful and we're in a good position. I fully trust in the guys.