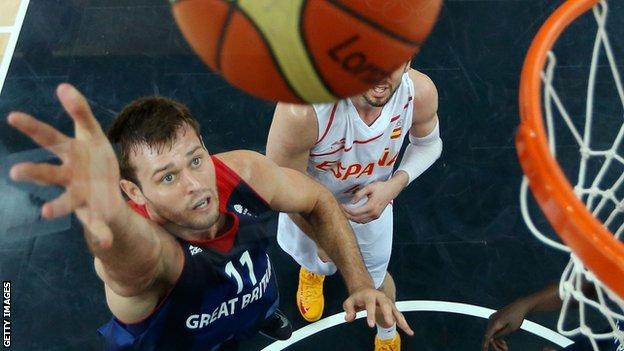 Great Britain men's team will be without their big NBA stars as they bid to make the most of their funding reprieve at EuroBasket in September.

Portland Trail Blazers' Joel Freeland has cited NBA commitments for his withdrawal from the event in Slovenia.

Freeland said: "It is a tough decision for me because I have been with GB for everything up to this moment."

It comes after Luol Deng, of the Chicago Bulls, pulled out through ill-health.

The GB men's basketball programme won its appeal against a funding cut in March and was awarded £7m over three years by UK Sport - provided it fulfils the funding body's strict performance criteria.

Basketball received £8.5m prior to the 2012 Olympics but funding was cut because of the lack of a medal prospect at the Olympics in Rio in 2016.

The men's 17-strong squad includes seven players who competed for Great Britain in the London Olympics, where they won one and lost four of their five matches.

Freeland added: "I remain fully committed and very motivated to continue to be a part of the national team and continue to help build the programme in an effort to take it as far as we possibly can."

GB's first preparation game will take place against Puerto Rico at the Copper Box in London on August 11, followed by trips to Finland, Greece, Poland and Spain for further pre-tournament fixtures.