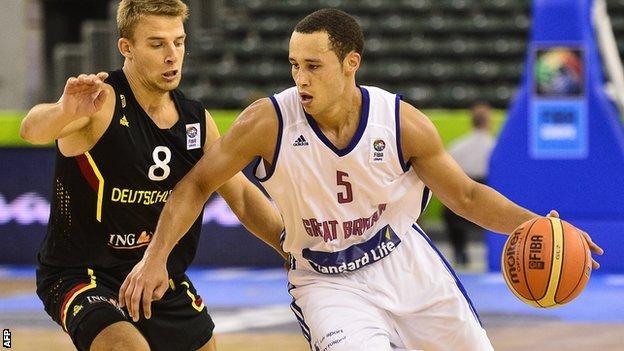 Great Britain are on the verge of a place in the EuroBasket second round after recovering from successive losses to beat Germany 81-74 in Slovenia.

Germany took an early 10-point lead, but their opponents scored the next 11 to edge in front. Lawrence and Myles Hesson then guided GB to victory.

GB must beat Ukraine in their final group match to guarantee qualification.

Only the top three from their six-team group will progress and Britain must finish in the top six at the tournament overall to get next year's Olympic funding.

To do that, they must progress through the second group stage and deep into the third, play-off, round.

"It was a hard fought win," said Lawrence. "We really needed it, I'm really proud of the way everyone stepped up."

Prunty was equally pleased with the performance.

"I thought we did a great job on keeping them in check," he said. "On the offensive end, we got a lot of positive contributions from a lot of people.

"We had just seven turnovers which is a great effort. Andrew played his best game shooting well, and showing some great defence.

"Myles Hesson was great again and Dan Clark played extremely hard, drawing a lot of attention out on the floor."