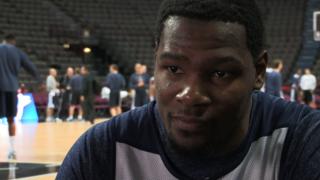 Speaking on the eve of Tuesday's NBA fixture between the Oklahoma City Thunder and Philadelphia 76ers in Manchester, Kevin Durant tells BBC Sport's Chris Mitchell it is tough to travel so far for a match but worth it to promote basketball to a global audience.

As one of the highest paid sportsmen in the world, Thunder star Durant also says he enjoys the anonymity of being in the UK, where he can be a "regular person" who goes shopping and to the cinema.

The game, to be played at the Manchester Arena, is part of the NBA's comprehensive Global Games schedule that will feature eight NBA teams playing in six countries as part of the 2013-14 NBA pre-season.