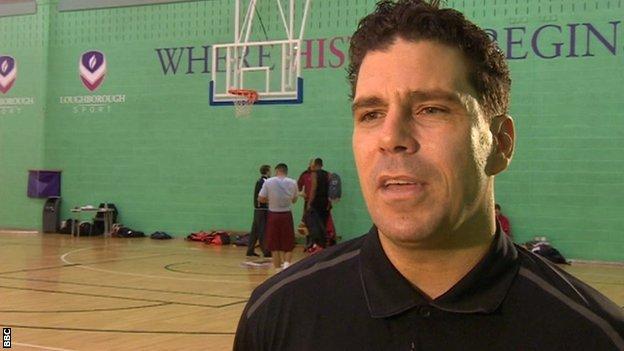 From being in this league for 13 years as a player and a coach, I have learned so much from watching how Newcastle have gone about their business

The Eagles have dominated the sport, winning five BBL titles and 17 major trophies since 2005, but Riders have now emerged as their main rivals.

They won a treble of trophies last term and beat them in the BBL Cup final.

"It's remarkable the consistency they have had," Paternostro told BBC Sport.

"For them to continue to do it year in, year out is so difficult. I can see that now from us trying to do it again this season."

Eagles are fourth in the BBL table, two points behind Riders, who in turn are four points adrift of Worcester Wolves - although both teams have two games in hand on the leaders.

Paternostro believes Newcastle are still setting the standard to which other teams must aspire.

He added: "From being in this league for 13 years as a player and a coach, I have learned so much from watching how Newcastle have gone about their business and what they have done.

"When you are in this position and you look up at the team at the top, you try to learn and figure out why they are there and what they have done and we have so much respect for them.

"We compete with them, we go at each other and we have been playing important games for the last couple of season. But there is a lot of respect there from both teams.

"Newcastle is a team that everybody in the team respects and we are a team that respects them even more having gone at them so much."