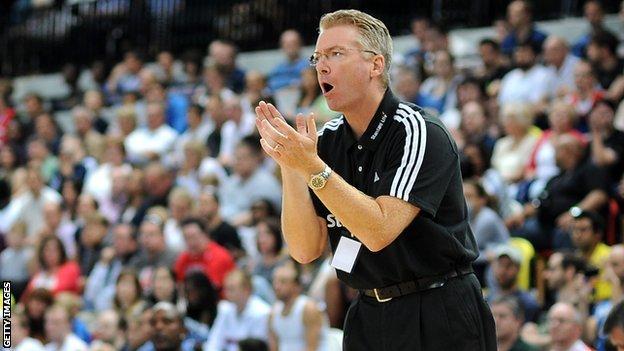 Great Britain's men have been drawn against Bosnia-Hercegovina and Iceland in the qualifiers for the 2015 EuroBasket finals.

The home and away games will take place between 10 and 24 August.

GB were in the second pot of seeds following their wins over Israel and Germany at EuroBasket 2013.

The first-placed teams in each of the seven groups, plus the six best second-placed teams, will qualify for the finals in Ukraine.

Great Britain have been drawn against Bosnia-Hercegovina each time they have entered EuroBasket qualifying - in 2008, 2010 and now 2014. In 2012, they were exempt from qualifying because they were playing in the Olympics.

Joe Prunty's side will begin their campaign away to Iceland on Sunday 10 August this year before hosting Bosnia-Hercegovina (the top seeds in Group A) on 13 August and Iceland on 20 August, and finishing their group away to Bosnia on 24 August.

GB's Group A is one of two three-team groups, with five other groups comprising four teams.

In order to determine the six best second-placed teams, in each of the four-team groups the results of the games against the fourth-placed team will be removed from the ranking process, in order to rank teams on a like-for-like basis across all of the groups.